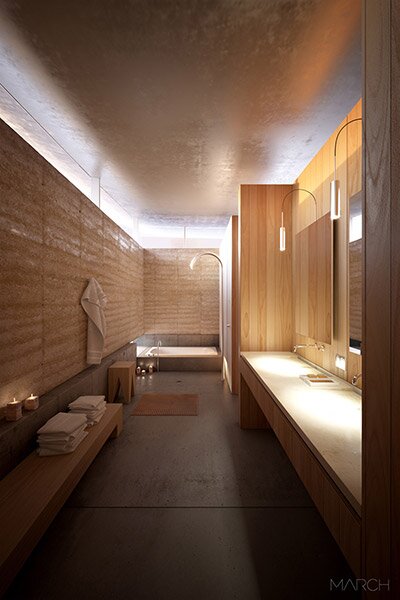 The works of its principles Brandon Hicks and Kevin Cimini, both former members of KDLAB and practicing architects with Masters from Columbia University, are recognizeable if not immediately attributable. Their stunning visualizations for Contemporary Architecture Practice’s Shanghai Reebok store to the helioscopes by Evan Douglis have graced the pages of countless books and magazines. Most recently they brought to life Avra Verde, a series of luxury houses in Arizona’s Sonoran desert by famed American architect Rick Joy, with computer graphics rivaling that of top visual effects firms. The project and their attention to detail reveals a desire to leverage digital tools in designing physically built, intimate scale architecture.

While Kevin Cimini’s past work as a digital architect on the Visual Effects Society nominated Mezzo commercials hints at another direction March is pursuing. Bringing formal architectural design to the film, broadcast and interactive industries where architecture is often overlooked or visibly handled by concept designers whose backgrounds traditionally reside in industrial design.

Another example of their digital architecture was developed for the United States Department of Energy’s FutureGen iniative. Working in collaboration with engineers and DOE personnel, March designed conceptual prototypes of zero emission power plants equipped with carbon sequestration. An injection of architectural design takes the eyesore of modern industrial complexes into a radically different future direction.

A direction worth watching. View their full screen portfolio at marchmade.com.